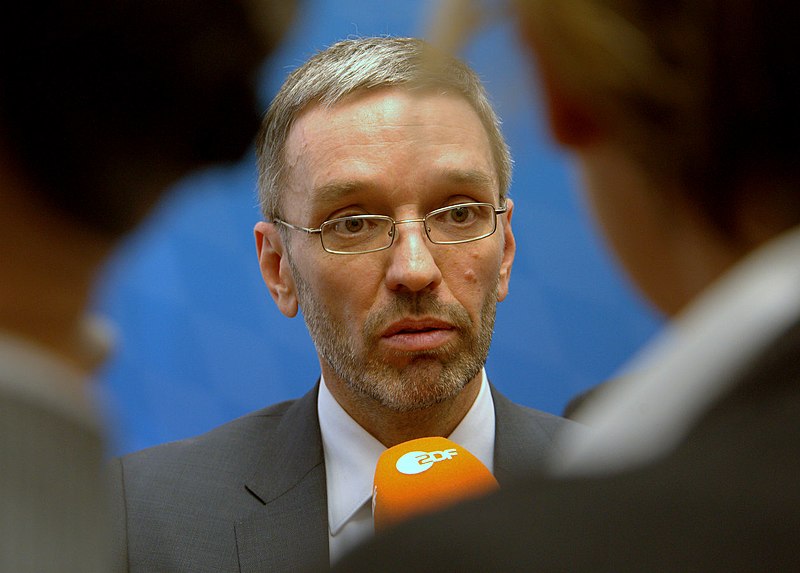 The Greek Forum of Migrants, welcomes the European Commission`s positive response to our call. Herbert Kickl has been, officially, excluded from the "EU High Level Group on combating racism, xenophobia and other forms of intolerance".

The Austrian Minister of Interior from the far-right Freedom party of Austria (FPÖ), that is currently in a coalition government with the Austrian People`s Party of the Chancellor Sebastian Kurz, had been invited to open the works of the "6th meeting of the EU High Level Group on combating racism, xenophobia and other forms of intolerance”, that will take place on the 16th and 17th of October in Vienna.

The response of the anti-racist & human rights Civil Society was immediate. The campaign, led by EGAM (European Grassroots Antiracist Movement), managed to amass the support of hundreds of human rights and anti-racist organizations and movements, all over Europe.

The Greek Forum of Migrants as a partner and a member of EGAM, participated in this campaign by calling the greek organisations to participate. We would like to thank everyone who responded and led us to this important victory. The decision of the European Commission, even after the call, to block from the group a blatantly racist political figure, brings to light the major issue of the policies chosen by the EU. The EU, in the end, has to choose who they converse with. Democracies cannot tolerate racism and hatred, so any efforts by racist and nazi groups or individuals to intrude will find us opposed, united as the civil society that fights against racism and for human dignity.

Find below the call for signatures, as well as the organizations that co-signed it:

No to the invitation of the neo-Nazi Minister to the Anti-Racism Group of the EU!

One does not fight against racism and antisemitism along with the neo-Nazis but by fighting resolutely against them.

It is this evidence that we are obliged to recall today, while it is the Austrian Minister of Interior from the FPÖ, Herbert Kickl, whom the European Commission has chosen to open the work of the next meeting of the “EU High Level Group on combating racism, xenophobia and other forms of intolerance”.

Created two years ago to nurture reflections against racism of the European Commission and bringing together antiracist activists, experts and institutional representatives involved in this field, the Group usually meets in Brussels, twice a year. It is planned that they will meet exceptionally in Vienna, on the upcoming 16th and 17th of October.

Thus, a leader of a party of heirs of Nazism, who calls to “concentrate migrants in camps,” who inspires the neo-fascist youth movement “Identitäre” which slogan is “Viennese blood, too much foreignness, it is good for nobody”, and who relies on “student fraternities” that exclude anyone who is not “Aryan”, some of which even calling to “gas a seventh million Jews”, would be an inspiration for the European Commission in its fight against racism and antisemitism?

That debates of ideas, sometimes lively, can be deployed in democratic frameworks, is a healthy necessity. That the FPÖ, due to its positions, is situated outside these frameworks, which they seek to destroy, is a fact. That the FPÖ attempts to instrumentalize democratic institutions by perverting them, in order to make believe that they are respectable, is a classic strategy of radicals. That the Austrian government uses its Presidency of the Council of the EU to try to wash itself of the infamy that the presence of the heirs of Nazism within it represents, is to be expected. The European Commission acting as a complicit in these wrongdoings, would be absurd and unacceptable.

Indeed, if the European Commission persisted in maintaining this invitation, it would betray the democratic ideals of peace, tolerance, equality and liberty that are the EU’s fundamental values. It would be a blow to those who, all over the continent in these difficult times, fight for these values. It would serve the FPÖ’s “normalization” strategy even though it is one of its worst enemies.

On the contrary, excluding Herbert Kickl from this meeting, would reaffirm the primacy of the EU’s fundamental values and strengthen the humanists.

The European Commission must make a clear choice.

A choice between working with the FPÖ and the other racist and antisemitic parties, or with civil society committed against racism. A choice between the ideology that led to the destruction of Europe, or the human rights that must be its foundations.

What is at stake is the maintenance or destruction of a “democratic sanitary cordon” within European institutions, especially those dedicated to the fight against racism.

It is simple: Herbert Kickl must be excluded from the meeting of the Working Group against Racism.

If his invitation were confirmed, this Group would lose its raison d’être and legitimacy, and we would not be able to participate.