Mapping of the Migrant Communities - part A A first draft of results from the Mapping of Migrant Communities in Greece, that is being held by the Greek Forum of Migrants, was presented for the first time in the discussion "Another Path to Integration", on the International Migrants Day 2018.

On behalf of the Greek Forum of Migrants, Mrs Adla Shashati as the Office Director and member of the GreekSudanese Community in Greece, opened the discussion by presenting the GFM`s Mapping of the Migrant Communities-members of GFM. You can read below the full speech along with pictures - infographics from the Mapping that it`s still ongoing: 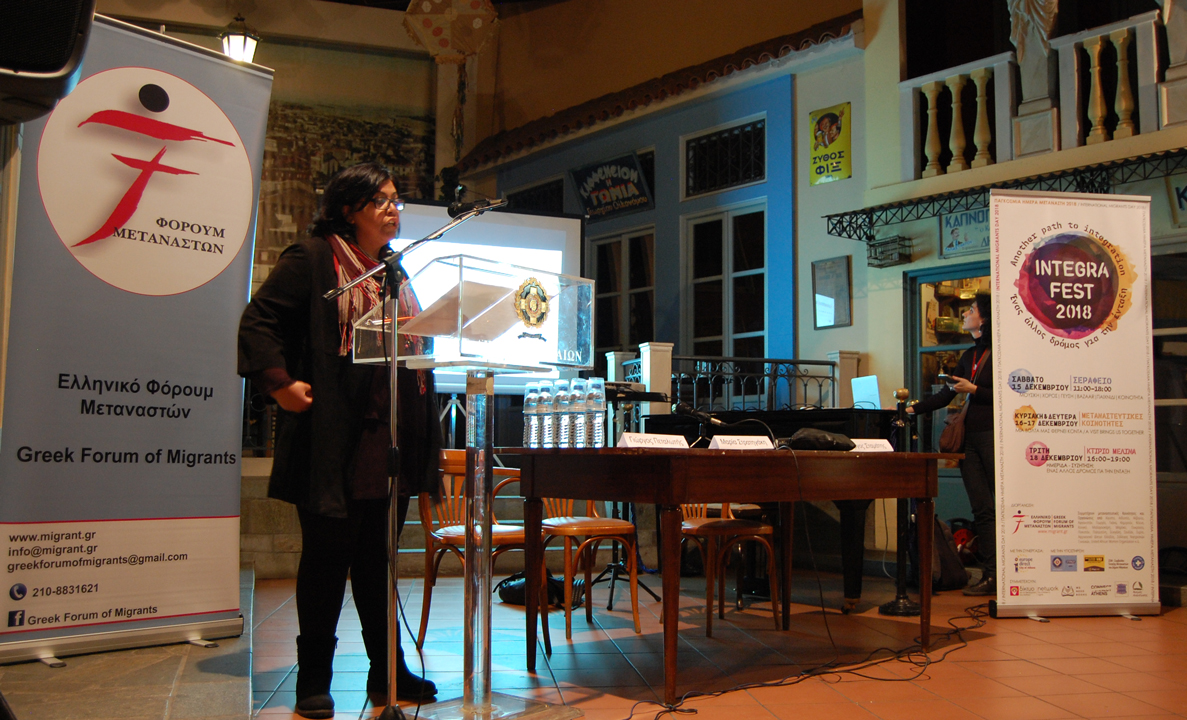 "...I am here today to present to you the first results from the Mapping of Migrant Communities - members of our network that we have done so far, over the past year, a mapping that actually reflects the efforts made by the migrant communities -members of the GFM for the integration of their members in the greek society.

We, the Greek Forum of Migrants, believe that the first step towards integration is the residence permit. Besides that, the attitude of the state towards education, work, health, political and religious rights, the safeguarding of human rights and the tackling of racism and discrimination will ultimately determine the way in which each person is integrated.

Integration of migrants into the Greek society is a fundamental goal and mission of the Greek Forum of Migrants over the last 15 years. We believe that it is achieved, if migrants themselves feel, that they are an integral, indivisible and active member of the society.

During the last year, we have started to map the Migrant Communities in Greece, members of the GFM, with an emphasis on the role of migrants themselves in the process of their integration into Greek society. This is a work in progress, so far we have recorded 33 of our 40 member communities-organisations, and we believe it is a fairly representative sample. As a first step, this record confirms that the main area of ​​the integration process is the community itself, the local community, the local neighborhood.

What has been done by migrants so far is a positive and important tool that should be computed by the state in any attempt to create an integration model. But let`s go back when it all started...

From our data, it seems that collective action by communities begins before 2000 and more specifically since 1988, at least in the communities that are our members. In fact, there have been collectivities of migrants since 1968. The first informal groups were students who then set up student clubs and unions and in the third phase they began to organize migrant associations and communities. The Greek Forum of Migrants has 40 migrant communities - associations and organizations as members, from Africa, Asia, Middle East & North Africa, Balkans and Eastern Europe, and also networks such as the African Network in Greece, networks for migrant women etc.

These migrant communities are the first point of contact between the migrant men and women and the host country, and are therefore forced to intervene at all levels of the integration process. 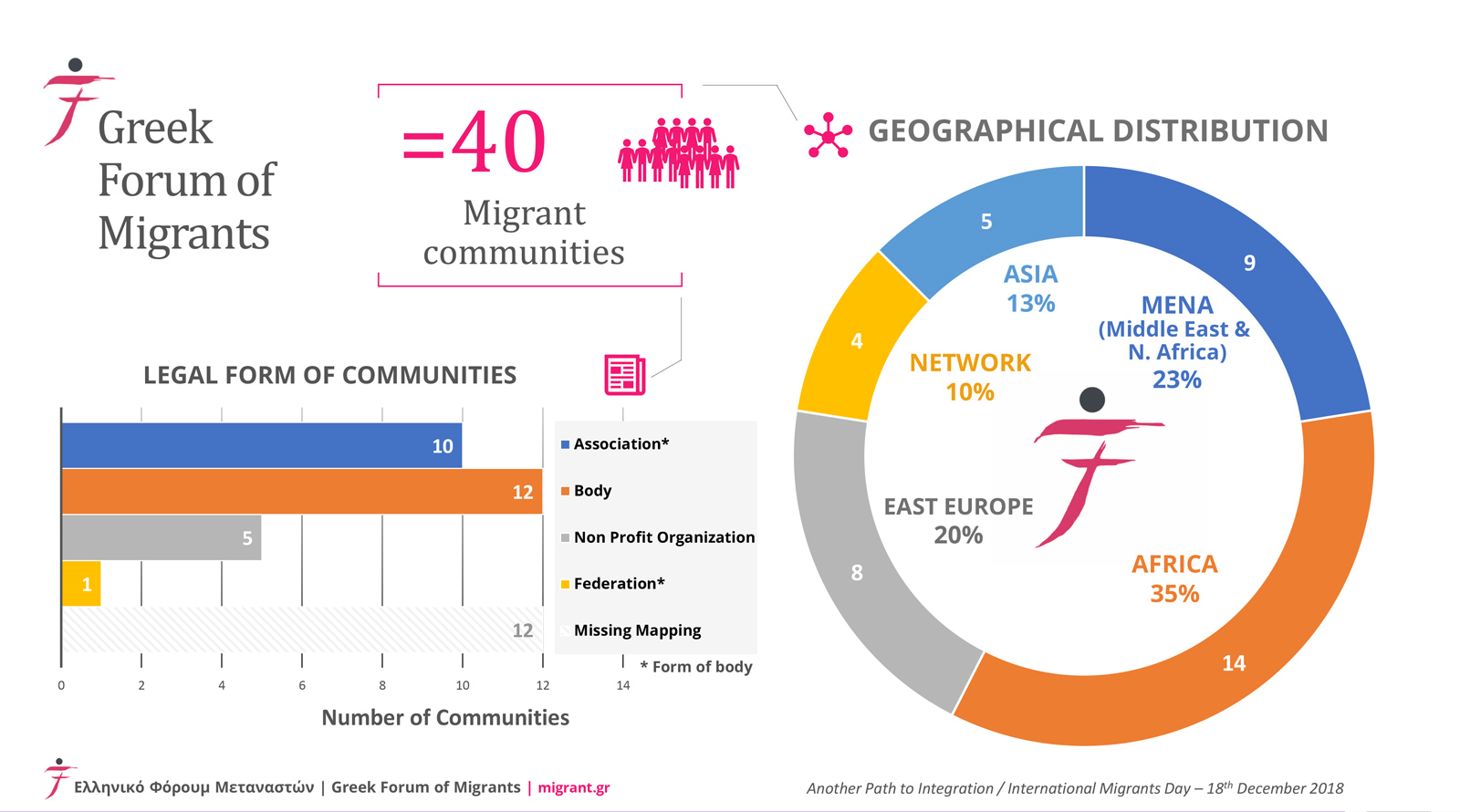 According to our mapping, the interventions in the integration process by migrant communities are divided into the following categories:

Almost all communities have organized, at least once, Greek language courses for their members, with the help of volunteers who are either Greeks or 1st or 2nd generation migrants. Most communities have organized “mother tongue” language lessons with volunteer teachers or professors who are members of their associations, computer classes or tutorial lessons with school curricula for children of their members, since it is usual that the migrant parents cannot help their children because they do not know the Greek language or due to the lack of time.

Data from the last year shows us that 13 communities do or did in the past Greek lessons, 12 English courses, 7 mother tongue lessons, 7 computer lessons, and 8 school tutorials for kids. When we talk about legal information we essentially refer to the dissemination of information regarding residence permits, procedures for permits renewal, any changes to laws and other essential information such as the working rights of migrants etc.
For all the actions a migrant community does, it must have its own space. The community is directly related to space, the physical space, when there is space then the community is stronger and more active. Its members are more able to deal with the living environment and thus contribute to social cohesion.

Communities are maintained and survive exclusively from the resources of their members, usually from the board, or their more active members. This explains the fact that few migrant communities have large spaces. From the mapping it appears that the communities that have official offices are 17 but the spaces are small, the rest are housed in members` venues, cafes or simply have a very small office that is the headquarters of the association. 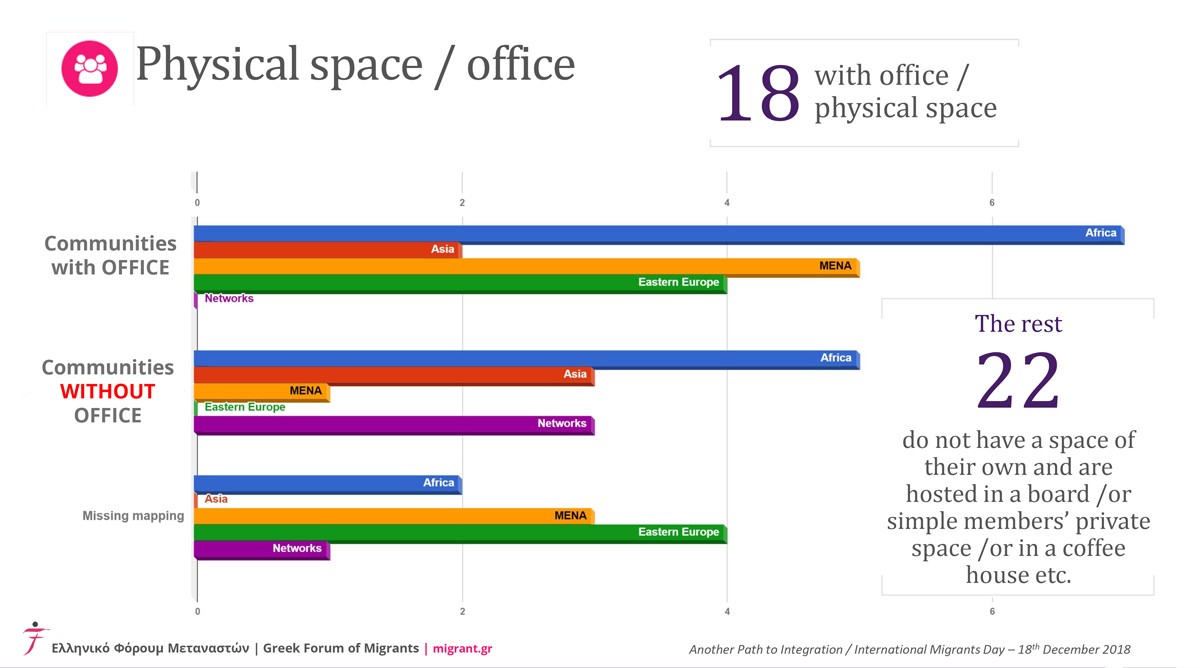 Almost all communities organize events with traditional dances and songs, many have mixed groups, while others have groups of minors, adults, choruses and music groups.

24 of our communities have a dance or music band and there are also communities like Georgia and Ukraine that have very organized dance groups like the Georgian Caucasus Cultural Center.

As far as sport is concerned, we see 12 communities with athletic teams (mainly football clubs) with the majority coming from African communities, and there are communities specializing in a particular sport such as the Pakistani community with Cricket. At this point, I would like to point out that we also noticed a relationship in terms of culture and football with the labor market. Athletes or artists from the migrant communities sometimes use these communities` schemes as publicity channels.
Turning back to the issue of information exchange, we see that more and more communities are using social media and the internet. 5 have a website, 10 facebook group, 18 facebook page and 4 facebook profiles. It is a fact that the migrant woman faces multiple discrimination both as a woman and as a migrant. While there are many government structures to support women from wherever they come from, there are still many migrant women who either do not know them or cannot visit them. For example, women working in homes, like several Georgian, Nigerian and Ukrainian women, are only free on Sundays.

There are many examples of abused women who are primarily reporting the incidents at their communities and although communities have no knowledge or social workers and psychologists they undertake, with the help of other women`s organizations, and manage to find safe hostels, legal and psychological support, and several times the members act as translators or mediators. We see communities trying to provide active support for gender and domestic violence issues and engage in anti-Trafficking efforts. In the last year, there have been 11 actions to empower migrant women from our communities

As far as the social structures are concerned, we see that they are the source of the actions of the migrant communities, for example the library of the Ukrainian community "The Land of the Stork", where the members organize events, it is a place of gathering for the Ukrainians or the Senegalese community social kitchen where, besides feeding the members of the community, it also offers meals to people in need. For example, while there were refugees on the street, the Senegalese community was feeding more than 50 people daily. Another example is the social health clinic of the Georgian Cultural Center, which for years provided free medical advice and assistance to migrants and Greeks in need. A structure that unfortunately is inactive this year due to lack of funding. 6) Religion / Religious Rights
In the results of the mapping, we observe that communities are informing their members about places of worship as well as marriage or burial procedures, or even the process of transferring the deceased to their country of origin.

As you can see, migrant communities take on a lot. And they are always active. Even when a community dissolves, the collective action of migrants is not interrupted. Even when the community is inactive, because of lack of space, resources, changes in the Board of Directors /Elections, the active members continue to gather the members and organize events. This is why we firmly believe that they should be counted in the state`s planning for the social integration of their members. And because the place of their action is the local community, the role of local government is very essential. Today we are here in an attempt to open a dialogue on a Greek integration model that will include the involvement of migrants themselves in the planning, creation and implementation.

I will close this presentation with a video showing what integration means to us:

Thank you very much."

Follow the link below to watch the full discussion of the discussion - conference "Another Path to Integration" from our youtube channel: 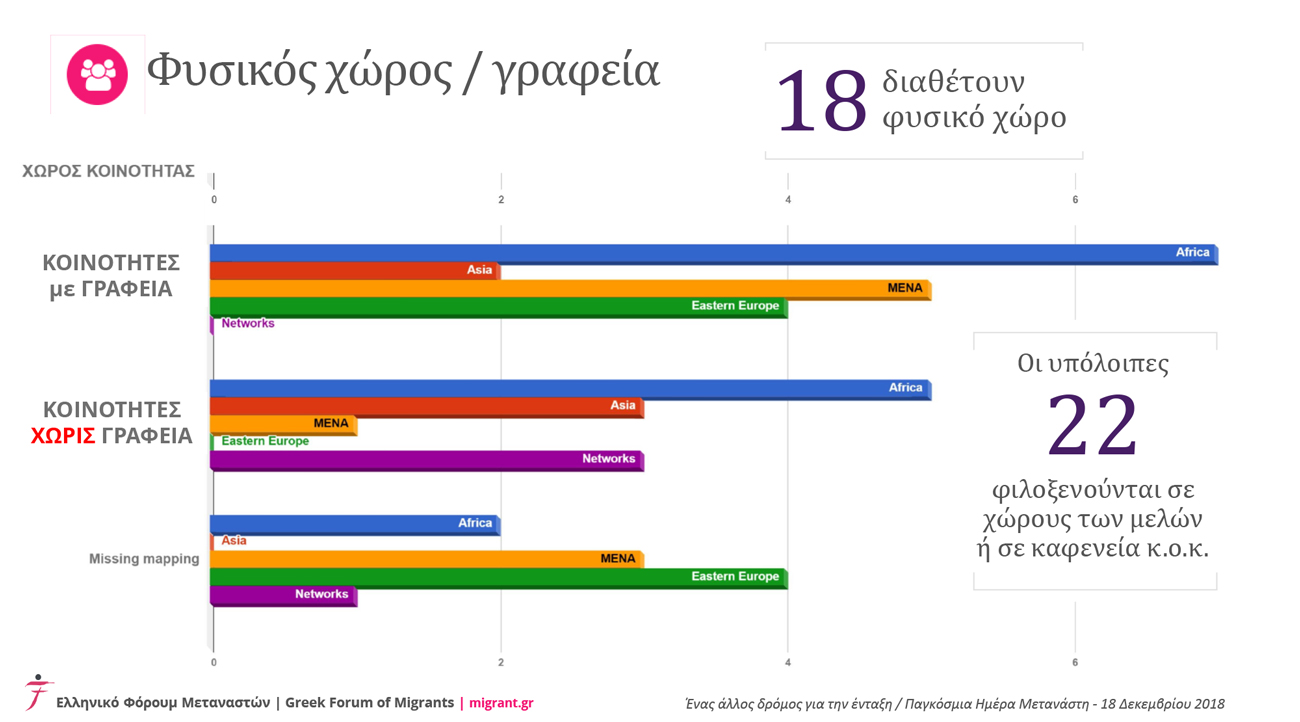 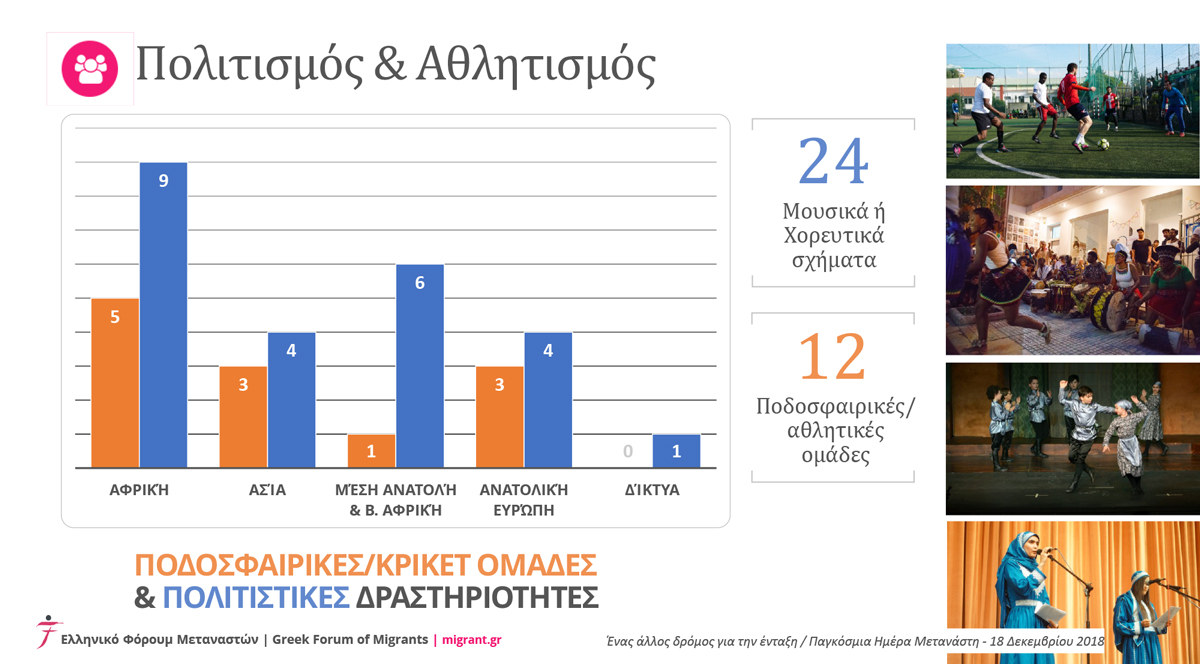 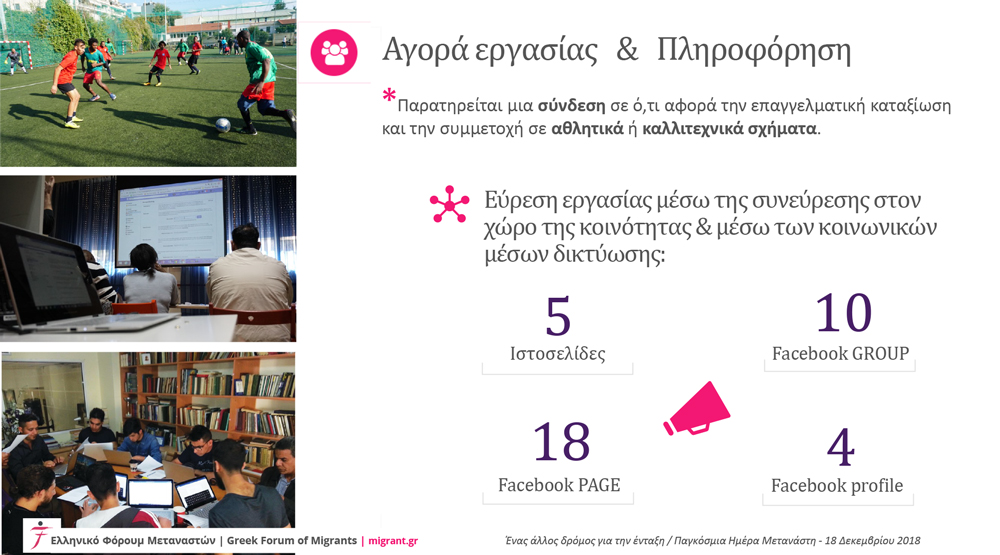