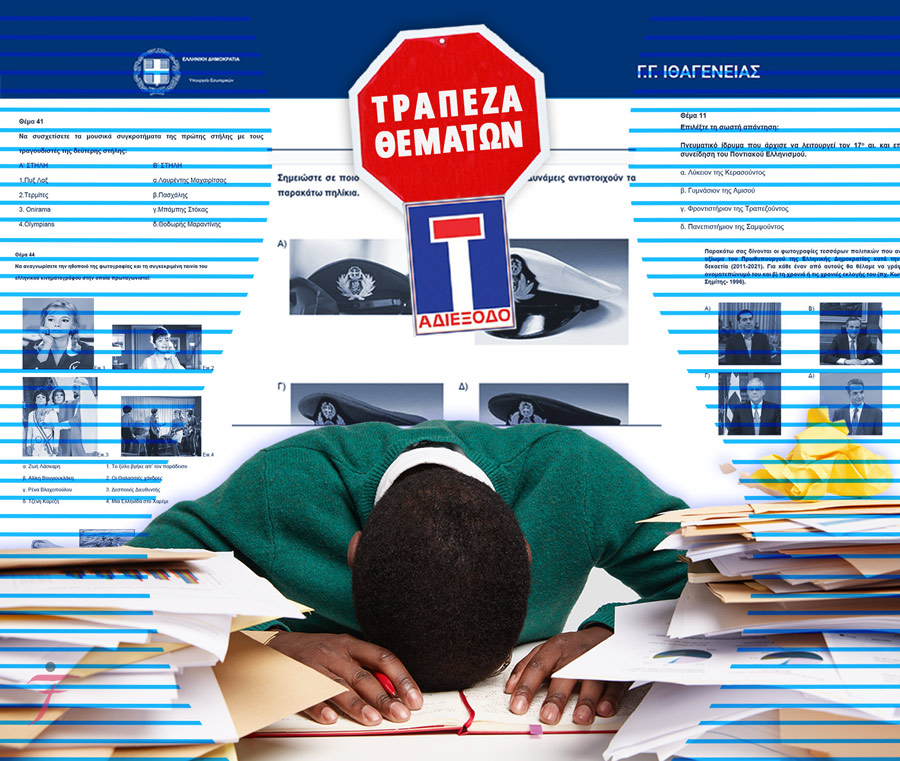 The new data of law 4735/2020 brought radical changes in the citizenship process and more specifically the examination process for obtaining the Certificate of Adequacy of Citizenship.

Adopting a decision of the previous government - regarding the conduct of written examinations on issues by a special bank of subjects, the Ministry of Interior presents these examinations as examinations for the creation of a modern and unimpeachable mechanism, harmonized with the standards of other European countries. This fact would be true and we would be drafted, since the Greek state was harmonized with the other actions for the integration of migrants. After all, the citizenship facilitates the integration of migrants, which is also a goal of the European Union, but also contributes to improving the standard of living of the indigenous population. Moreover, in Greece, where migrants are not allowed to participate in local elections, acquiring the citizenship is the only way for us to participate in the democratic process.

Instead, the new examination system for the citizenship of Greek citizens, instead of solving problems, exposes the existing ones, and in each case, causes new problems, such as:

No initiative for education in the Greek language and culture
To this day, there is no provision from the state for organized courses in Greek language and culture. Anyone who wishes - if not must- to learn the Greek language, is addressed either to the migrant communities themselves, where -when needed- free lessons are given by volunteer teachers, or to the free lessons of Civil Society organizations.  Unfortunately, from the state`s side there are only a few individual efforts in the local government depending on the Municipality. The need for Greek lessons is so great that people are forced to spend months on waiting lists. A constant request of the Greek Forum of Migrants is to use the money from the fees paid by migrants for the renewal of their residence permits in programs related to their social integration; language learning should be one of them.

Unrealistic volume of questions and non-existent answers
The theme bank covers 500 topics (Geography, History, Culture and Political Institutions of Greece, understanding oral and written speech), a total of 964 pages! At the moment, about 30,000 of our fellow citizens, in order to continue the process - with the provisions provided - for their citizenship, will have to take exams in May 2021. This means that they will have to study the above volume of subjects in less than 3 months, so that they can successfully pass a Greek language test (level of B1 and B2). A period of time which is even shorter than intensive Greek studies programs, such as e.g. of the Hellenic American Union. According to an examination center for Greek studies, a B * level * course lasts one academic year, with courses lasting a total of 30 weeks (3 hours 2 times a week) or in the intensive program the courses last 12 weeks (3 hours, 5 times per week), a program that is impossible for an employee or migrant worker or a refugee to attend. In addition, the correct answers or even the material that the candidates should read are not posted anywhere. Instead, books have already been published by the private sector, at a cost of 48 Euros each and in several cases with incorrect answers.

Incompatible criteria for the socio-political integration of a foreign citizen
Repeatedly reading the questions published on the online platform of the Ministry of Interior, we fail to understand how these questions are answered as criteria to understand the examiner whether the examinee has joined Greek society or not. We wonder how the status of a Greek citizen is related to the knowledge of pop music bands, scenes of old Greek cinema or questions about football. Questions such as the one that seeks to define the spiritual institution of the 17th century that influenced Pontian Hellenism or the issue where Apella must be described in 30 words or what are the nine substantial changes made to the Constitution in its last revision, we believe are impossible not only for Greek citizens to answer but even students or university professors. These exams may be in the form of pan-Hellenic exams, but the candidates are not students. They are ordinary citizens who want to become Greek citizens, not to study at a university. Finally, it should be noted that questions concerning Christian Greek Orthodox customs and traditions, such as the walking on fire, the kolyva or the goblins, may not be answered by a Greek citizen or someone who is a Greek citizen of a different religion, e.g. a Christian Catholic.

No to the horizontal compulsory participation in the examinations without exceptions
We already know that the potential difficulty of some people to take these tests, such as people with disabilities, has been calculated and we welcome that. However there should be provision for our illiterate fellow citizens but also for those who have lived in the country for many years and no longer have the opportunity to go through this educational process. We have examples of people who are over 30 - 40 years in the country with legal and continuous residence, but do not have the ability to take national exams. We ask that the age limit be taken seriously and that the oral examination be adjusted to a lower age limit than that of 62 years. In other European countries, such as the Netherlands, the corresponding age limit for written examinations is 58 years.

We know that Greek citizenship is not a panacea and that it is not required for a foreigner to be able to live legally in Greece, since a valid residence permit is enough, even though it does not guarantee the same rights as Greek citizens. However, everyone has the right to strive for citizenship, and when the questions are addressed to very few instead of to all, one might assume that the aim is not to ascertain the degree of inclusion of the examinee, but to dramatically reduce the provision of citizenship.

In less than a month, about 30,000 of our fellow citizens will be invited to take exams with this system, while many have submitted their applications under the previous system. The newly enacted theme bank clearly lays the groundwork for our mass exclusion from the naturalization process. We want to believe that this is not the goal of the Greek government.

Based on all the above, we immediately ask for the reduction of the bulk of questions, the free provision of the correct answers, the expansion of the group that has more favorable treatment due to age, disability, illiteracy, etc., the focus of the examination questions on issues of effective integration, as well as care for the educational process of the candidates. In addition, we call for the immediate withdrawal of the theme bank and propose an immediate review and overall improvement of the entire naturalization system that meets European standards not only in terms of the examination system but also in terms of effective integration.

Co-signed by the migrant communities - members of the Greek Forum of Migrants:

AFRICA:
Association of Cameroonians of Greece,

Union of Guinea of Greece,

Association of Senegalese of Athens,

Ukrainian Community `The land of stork`,

Association of Free Expats of Syria, 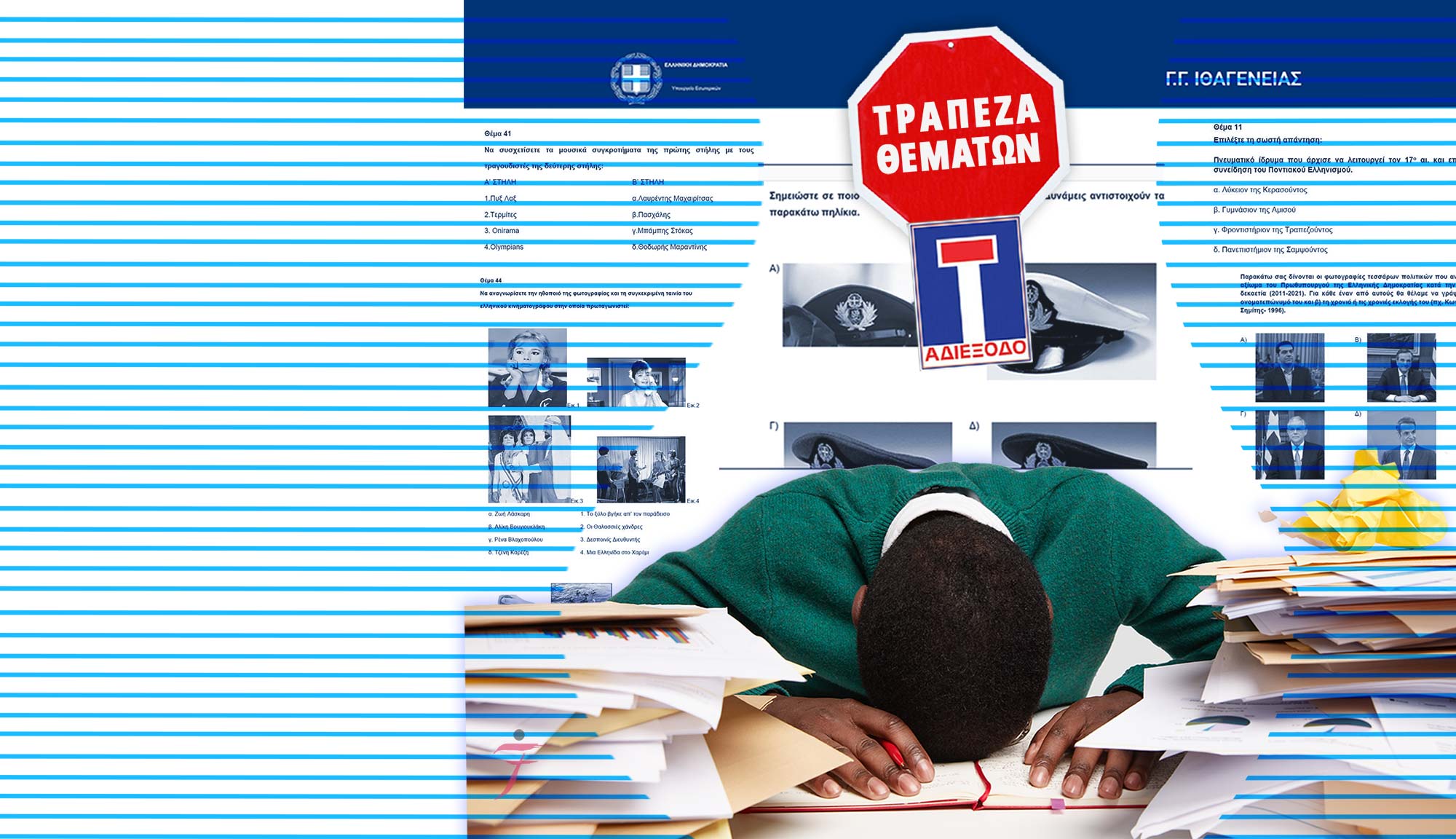